[Replay Webinar]: International development: how and why to export your innovations?

It is a fact, companies that develop internationally, innovate and generate more turnover.

The international market is the main growth driver to absorb any losses due to the current health and economic situations in France.

To generate more growth, export your innovations! How to go about it ? How to make your expertise shine globally?

We had the pleasure of co-hosting this webinar with the French Tech network, Bpifrance and France Innovation.

What you will discover in this replay:

The SME can be cautious about exporting, given the investment required for its establishment. Exporting requires knowing the host country, finding the right partnerships and distribution networks.

Would export be a solution to the crisis? Are innovation and export closely linked? Public aid represents more than half of companies' external resources. Certain export aids in particular provide assurances against the failure of the business development, or facing the risks associated with exporting.

Export and innovate to generate growth?

As INSEE notes, “ All other things being equal, for the same sector and size, whether they belong to a group or not, the probability of innovating is much higher for exporting companies than for others, especially in products, and in particular in new products on the market. the market ".

The more the company's market extends beyond its territory, the greater its propensity to innovate.

" Exporting implies adaptation to an often demanding competitive external market. It is more difficult to establish itself on the international market with already existing products, in particular because of the costs generated by international trade (transport, adaptation to the standards in force in the various countries, etc.) ".

Export generates real effects of learning and specialization on innovation and productivity, provided that the export is intensive and sustainable.

Exporters who invest enough to sustain themselves and expand their exports benefit from these effects.

In contrast, occasional exporters who have "hit and run" strategies in more easily accessible markets will not derive additional innovation and productivity from exporting.

Among the reasons given by those who decided at this stage to put the export on stand-by:

1- lack of visibility into the future (37%) : travel, production, country decisions, HR = lack of information on international markets in real time….

2- the logistics (21%) : this subject includes both the ability to ship export orders ante Covidthan to source imported parts or semi-finished products.

4- future financial situation (18%) to continue to finance the export.

5- the difficulties ofexecution of export contracts (3%) and customs (2%) are rarely mentioned at this stage.

To develop internationally, it is better to be well supported

Indeed, exporting increases business opportunities by allowing companies to access technologies and knowledge not available in the domestic country, thanks to more direct contacts and facilitated interactions with new competitors, distributors, customers. and foreign suppliers.

In addition, export markets are considered more competitive because they are characterized by sustained and demanding demand to attract a large number of suppliers.

This should encourage firms wishing to set up export operations on a long-term basis to step up their innovation efforts.

Finally, the fact of exporting allows exporting companies to better value their production / - either by achieving economies of scale in the case where the company has chosen "standardization", - or by generating more value by differentiating by adaptation or "customization"

Access to public support suffers from a fairly significant lack of knowledge: almost half of the unsupported companies do not know what aid they can claim

16 % of supported companies had problems accessing information on possible funding

#ARSINOE is now live! Great kick-off in Athens, a big thanks to the project's coordinator: the University of Thessaly and to @Claspidou.

G.A.C is proud to be part of this ambitious project. Stay tuned to learn more about the project!

Our back-to-school seminar took place on Thursday 23 and Friday 24 September 2021 at DOMAINE DE FORGES. Excellent stay with all the employees in a good mood. We thank @MichelPodolak, conductor for his intervention in music.
#confidence #enmusic

Are you searching for a Chinese / European partner to work on one of these thematics? This could be of interest! 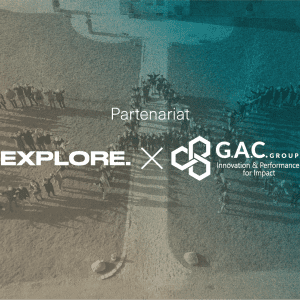 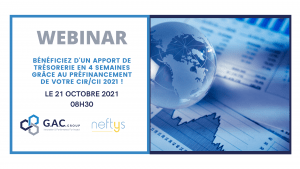 Did you know that you can now benefit from the pre-financing of your CIR / CII 2021 up to your R & D & I expenses incurred since January 1, 2021! GAC Group joins forces with NEFTYS to present the advantages of Preficir ©: an opportunity to provide rapid cash flow for the development and growth of your business. 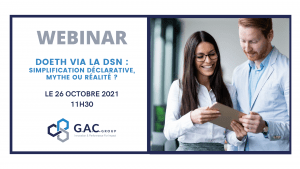 DOETH via the DSN: Declarative simplification, myth or reality? Register for our webinar on October 26, 2021

We are pleased to organize a webinar dedicated to your DOETH. Your next DOETH in February 2022 will transit through your DSNs. You will have 1 month to act, between the reception of your workforce calculated by URSSAF scheduled for the end of January and your DSN to be submitted at the beginning of March, in order to: - Check the workforce transmitted by URSSAF (subjugation,